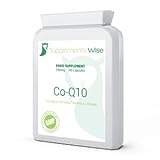 Fermentation of CoQ10 results in a pure “trans” form of Q10 which is the form which naturally occurs in the body and is therefore more easily recognised and processed internally.

Our CoQ10 capsules are suspended in sunflower oil for more efficient absorption and delivery into your body.

Co-Q10 is a vitamin like substance which plays a central role in the body’s energy supply process, acting alongside enzymes (thus the name coenzyme Q10) to convert sugars and fat into energy. Coenzyme Q10 is also has an important role as an antioxidant within the body. Coenzyme quinones occur in several chemical forms, with coenzyme Q10 being the only form found in human tissues. Coenzyme Q10 is also important as a major fat-soluble antioxidant, offering protection to the cell membranes from the damaging effects of free radicals, in a complementary manner to vitamin E. Coenzyme Q10 may promote healthy cardiovascular and immune function (as cells involved in immune response have a high energy dependence). Coenzyme Q10 (CoQ10) is also referred to as ubiquinol or ubiquinone, names of different forms of CoQ10 found within the body. There is a common myth about CoQ10 that ubiquinol is more effective than ubiquinone. This has been due to a wave of companies who produced the ubiquinol form and then falsely marketed it as a superior version. The truth is that regardless of what form of CoQ10 you take as a supplement, the body is able to convert the consumed form to the other form as needed. In other words, if you take a reduced CoQ10 supplement (ubiquinol), the body can convert the reduced CoQ10 (ubiquinol) to the oxidised CoQ10 (ubiquinone) and vice versa. This conversion takes place to maintain a state of equilibrium between reduced CoQ10 (ubiquinol) and oxidised CoQ10 (ubiquinone).